With a sampling rate of 2.0 GHz to 2.7 GHz, the vDAQ-HS can record at sub nanosecond time resolution. The signal conditioning controls created exclusively for the vDAQ can bin photons collected with this high resolution into any of 32 virtual channels based on user defined temporal windows.

The following hardware is used:

The high speed vDAQ is installed as is described in page vDAQ Installation.

Connect each Photomultiplier Tube (PMT) to the input of a separate high bandwidth transimpedance amplifier (TIA), and connect the the output of each TIA to the high speed analog inputs (HSAI) of the vDAQ. The ports are enumerated 0 and 1 on the vDAQ card’s PCIe bracket. Each are SMA male connectors; the cable from the TIA to the HSAI ports may need to be adapted from a different style connector on the TIA output.

If time correlated photon counting is desired, then the sample clock should be synchronized with the laser clock. For the laser clock connection, the high speed vDAQ requires a clock with a frequency between 62.5MHz and 84.375MHz, and signal amplitude between 0.4V - 5.0V peak-to-peak.

If the repetition rates of the laser is a fraction of this acceptable frequency range, a clock multiplier board can be used to produce a frequency within the 62.5MHz and 84.375MHz range. Since acquisition is then synchronized to a multiple of the laser rep rate, a larger volume of data between consecutive laser pulses will need to be ignored in post-processing.

Make sure to view the clock signal on an oscilloscope to discern signal quality. The clock input is 50 Ω, and AC coupled, so set the oscilloscope to these settings. Additional hardware may be required to clean up the signal if the repetition rate is not detected correctly or the Phase-locked loop (PLL) is not established.

In the case that the signal needs to be cleaned up, one can use an amplifier with suitable bandwidth to clip the noise from the signal by using a gain which amplifies the signal beyond the supply voltage of the amplifier. 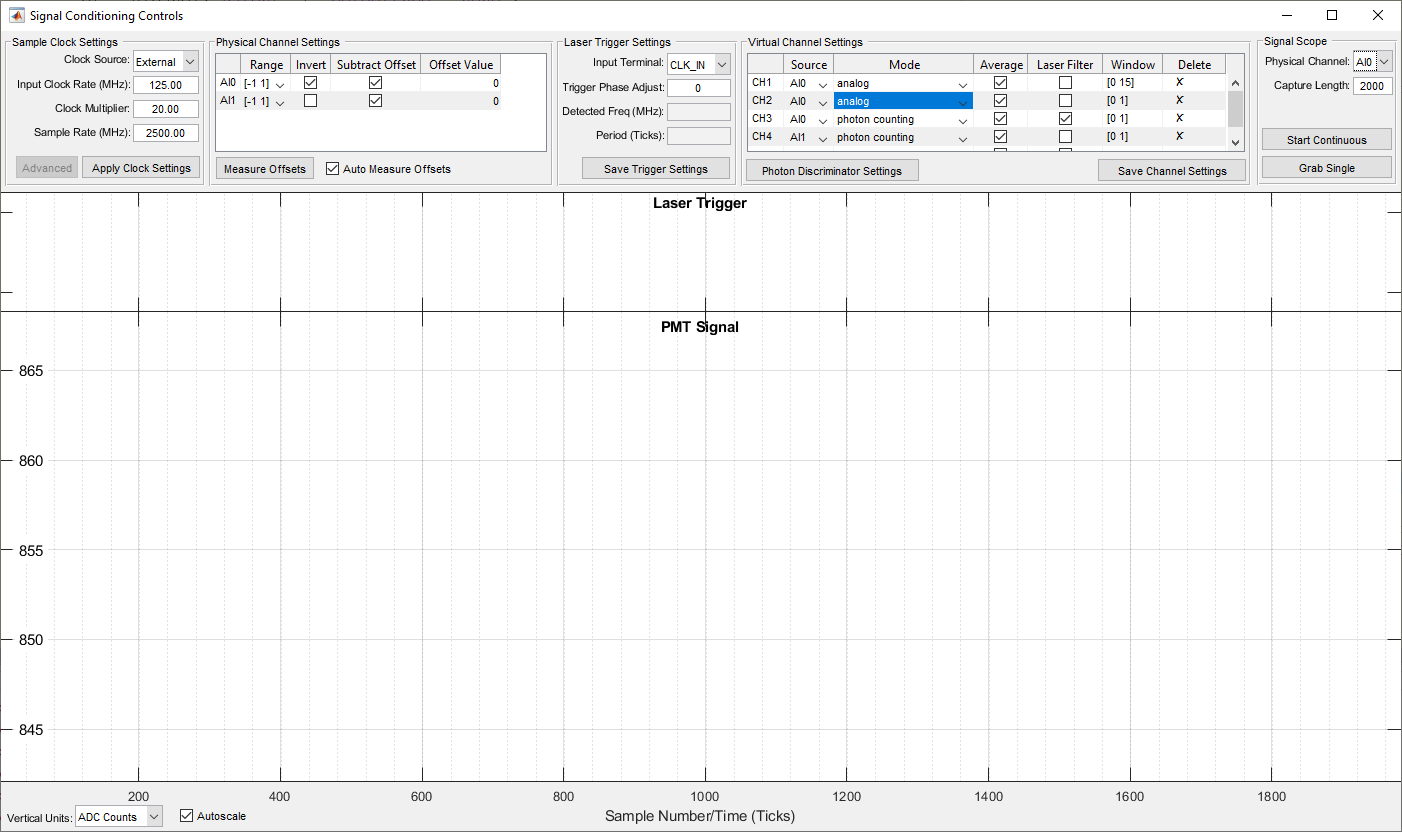 Bring up the Signal Conditioning Controls window. First, notice the Signal Scope panel at the top right corner. The PMT signal can be monitored continuously, or a specified Capture Length can be grabbed. After preparing a sample where signal-to-noise ratio will be expected to be low and focusing at an appropriate depth, leave the acquisition in a Focus state and go back to the Signal Conditioning Controls GUI to press the Grab Single button.

This will populate the PMT Signal graph with data. From this data, decisions can be made on settings such as tolerances required for a peak to be counted as a photon. One can zoom in temporally by scrolling with the mouse wheel, or one can decrease the number of samples per grab, and do another grab.

the Virtual Channel Settings contains a table with a row per virtual channel. In the Mode column (column 3) of this table, the integration (analog) or photon counting data pipeline can be selected for each of the two SI channels.

The settings for determining how the photons are counted can be adjust now. Under the Threshold Crossing detection mode, any crossing of the threshold from below to above is counted as a photon. The dashed orange line represents the threshold, and it can be clicked and dragged to set a new threshold.

The threshold can also be set by typing in a value. To do this, click the Photon Discriminator Settings button, and edit the text in the box labeled Detection Threshold.

There is a second detection mode called Peak Detect. In this mode, a second plot is made from the original PMT signal called the Differentiated PMT Signal. This plot is made by simply taking a sample’s value and subtracting the sample value from a previous sample. The threshold is now applied to this differentiated PMT signal rather than the original.

The number of ticks separating these samples is known as the Differentiation Width, and is settable from the Photon Discriminator Settings.

In CH1 under the Source column column (row 1, column 2), one can specify that SI channel 1 should actually read the PMT signal from HSAI1 rather than HSAI0.

Up to 32 virtual channels can be added.

Virtual channels can be enabled to display or save from the Channels window.

In the case of the high speed vDAQ which has two high speed analog inputs, channels 3 and 4, do not control anything.

If the sampling rate is synchronized with the laser rep rate, virtual channels can be used to bin samples by user defined temporal windows to separate out photons emitted by fluorophores with different fluorescent lifetimes. The windows are defined relative to each laser pulse.

First the external laser trigger must be configured. See the Sample Clock Settings. Set the Clock Source to External. Then set the input clock rate to the external clock rate (which must be between 62.5MHz and 84.375MHz). The Clock Multiplier must be 32; The resultant sampling rate should be between 2.0 and 2.7 GHz. In the laser trigger settings panel, set the Input Port in the Laser Trigger Settings panel to CLK IN. Finally, click Apply Clock Settings.

Verify that the laser clock frequency is measured correctly from the Laser Trigger Settings panel under Detected Freq (MHz).